New song and Video Who killed Reza Berati?
by Phil Monsour on March 11, 2014 in News 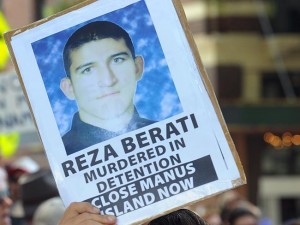 Reza Berati was a 23 year old asylum seeker murdered on February 18 2014 on Manus Island in one of Australia refugee detention centres. 77 other asylum seekers were also attacked and wounded. No one has been charged with his murder.

The Australian Government continues to fail to meet its obligations to protect the human rights of all asylum seekers and refugees who arrive in Australia, regardless of how or where they arrive and whether they arrive with or without a visa.