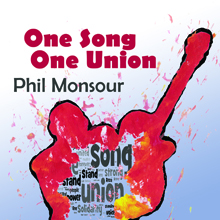 2. Still Need a Union
3. Better Work Better Life
4. One United Voice
5. What Will Our Children Do
6. Solidarity Forever
7. Let Them Stay
8. Stand Together
9. Not For Sale
10. Who Killed Reza Berati
11. Blackfella Whitefella
12. Stand With Us

New album of contemporary trade union and solidarity songs featuring one song dedicated to each union.

This album came to life on two picket lines. The first at the Brisbane waterfront. The shipping giant Hutchison fired half its workforce by text message. One More Day than Them is inspired by the Maritime Union’s fight for the workers. After 100 days of picketing they defiantly walked back through the gates!

The second picket line at a children’s hospital – brave medical workers refused to discharge injured refugee child Asha into Australia’s infamous offshore detention prisons. Let Them Stay was written then. In a small victory, baby Asha and her family were allowed to remain, all be it, in community detention.

This album reflects this trade union resistance, with a song dedicated to each participating union. For a year I met with them and wrote songs to capture their defiant spirit. Themes often overlapped: the fight for safe and fair conditions, decent wages, secure jobs and respect. I hope this collection can play a part, however small, in the fight for justice.